The Year the World Stopped Spinning 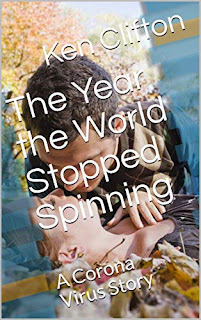 The Year the World Stopped Spinning (short story, $0.99 Kindle download or read it in your browser)

Michael remembered it like it was, yesterday, even though it had been a decade. In an instant of time, things had changed…reality’s very framework had changed…and everything was different. It was like someone had changed the channel on the tv of society, and the characters on the screen were acting out a different story, entirely.

Before the change, Michael had goals of making money, getting up a savings, and making a career for himself. He thought about the things he could buy and the trips and vacations he could do. He worked hard for his money, but he made sure to take time for running, shopping, entertainment, and more. His last relationship was ending, and he began to think about starting again with new dating profiles and thinking about future dates and romance with various women.

From a young age, Michael had always been able to read situations and recognize patterns and adjust, faster than those around him. As it unfolded, he knew within days how the dominoes would fall, and he began to make preparations, but even he could not have anticipated how things would change….would not have assumed that society would surrender to much and follow the paths that were taken.

Coronavirus was the name given to the instrument of change…..the scalpel that would slice civilization right off the corpse of humanity’s populace, leaving in its wake the dystopian survivalist free for all that within one year eliminated the concept of freedom and choice and replaced it with promises of safety and control.

Where the year before a satire of a religious society that dominated its people was nominated for multiple awards, that same society was actively at work establishing which form the next government dominance would take and deciding what freedoms would be returned…. Freedoms that would NEVER be returned, as it would seem. After that, those prior goals became pipe dreams, and it soon became clear those days would never be repeated, again.

Michael remembered when it all happened, though he didn't know the depths it would take him …

--
This is a satirical look at our present situation and the coronavirus with references to real life changes taking place. My hope is that this STAYS satirical and that humanity would be wise and courageous enough to never let it happen, even though we live in a society ripe for the picking and have young generations unfamiliar with the warnings the world has experienced in in the past and which are STILL happening in places we don't talk about.

Email ThisBlogThis!Share to TwitterShare to FacebookShare to Pinterest
Labels: books