Movie Review: Ask Me to Dance

As the initial post of my Entertainment tab on the blog, I want to review a movie I saw over the weekend... again, alone.  You don't have to go with others.  It was called Ask Me to Dance.  It hasn't got a lot of fanfare.  Indeed, I was the only one in the theater for it at night.  However, I greatly enjoyed it... 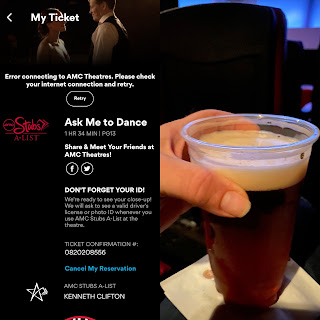 I watched it on my AMC A-List that I have definitely not been using enough to make it worth having... costs 23 dollars a month, and you can watch up to 3 movies a week free for that.  But, they charge you 23 to CANCEL, as well.  Also, at least at this AMC, it has a bar, so I got a Sam Adams Octoberfest on the way into the theater.

The movie is about two people that we follow, starting at the beginning of the movie, where they both just happen to be at a dance contest in a club.  He left, and she asked about him as he left, but she had just missed him.  This would continue to happen, throughout the movie, as he walks past her shut door, his phone dies before he can talk to her when a friend tried to set them up, etc.  But, an old lady with a cat on a bridge tells them both that they will find the love of their life by midnight New Years Eve... 5 days away.  So, they are both inspired to believe it and start getting out there...to DISASTEROUS results that many of us that have been out in the dating scene for a while (both now for me and before my last wife) can attest to having some truth to them.

So, it's funny, as we see the guy go on dates with a woman that wants to have sex parties, a stalker, and someone that stabbed her last boyfriend, and she dated a man that got all grumpy because she mentioned Breaking Bad and then asked if sex was a given and a young clutz that almost knocked her out with an accidental head but.

But, without spoiling the movie, it has a very sweet ending, and it is inspirational that if you just keep trying past all the cautionary tales, you might just find someone also trying to get past them, too.  Go see it.  Worthy.

Email ThisBlogThis!Share to TwitterShare to FacebookShare to Pinterest
Labels: entertainment