It Isn’t What It Isn’t 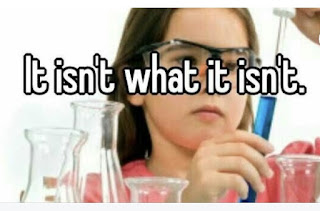 I made that meme, above, a LONG time ago... maybe a decade, and it is a good thing to keep in mind.  If you read my other post I did over the weekend, I talked about how December was a very hard month for me, and I gave the reasons.  However, I talked about several brutal realities that I had to accept that prompted me on to the path towards success that I am on, now.  It was the same time that I was more religious and spending time with God, and I think he knew that I wouldn't move FORWARD, unless I knew that the path I was on was not as successful as I pretended.

The fact of the matter is that I was living poor, when I didn't have to be doing it.  The fact was that I didn't have anyone close to me in the holidays.... THAT was the result of waiting on it and being "ok being single"... which obviously I was not.  The fact is that over that month I didn't have anyone flirting with me, reaching out to me, or making any effort... but of course neither was I.  The truth was that what I was DOING was not and has not worked for my goals, so things had to change.

I'm still figuring out my steps, but this post serves this purpose... to remind you that the worst lie that you will face in your life is the lies you tell yourself, because it will keep you from leaving bad situations and making efforts towards something new.